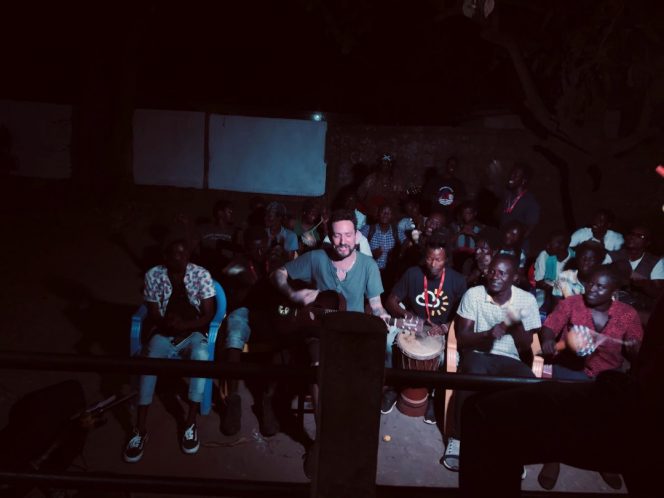 This is a tour diary relating to our return trip to Sierra Leone, Jan 9th 2020 with our ambassador Frank Turner at the helm – read our announcement here – the following is a day-by-day account written on the road. Enjoy.

A whirlwind first day back in Salone began with radio and TV talking about WAYout Arts and what they do for street youth through music.

We visited a female prison to watch the new choir recently established and returned to see the fantastic progress in Susan’s Bay, Fisher Street Market and Ferry Junction where we were treated to performances by street youth who are now firmly part of the WAYout family.

The fundraising efforts by the JSF and Frank really do go a very long way over here. 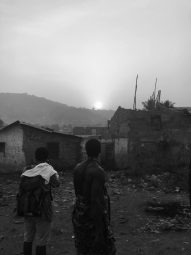 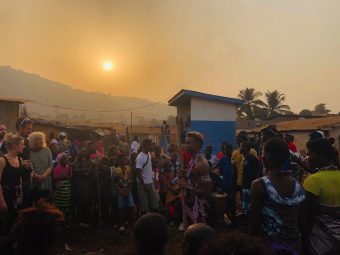 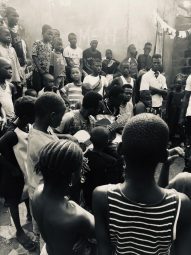 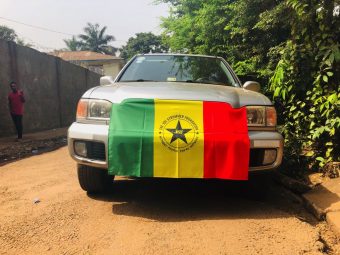 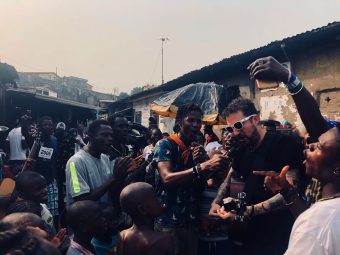 Today we took the mobile studio out to the provinces, farther than we’ve been so far to a place called Songo where around 1000 people live.

There is 80% unemployment and life is tough. This was the 6th time the studio has visited and during our visit two groups were recording. One of them, VDC were damn good.

They have a local radio station who have been playing their stuff. The evening saw Meeky, Sulcut, Mozis Rozis support Frank at a fundraiser on Lumley Beach which seems like a different world to the slum areas of Freetown.

It was amazing to see these young artists continuing on their musical journey, there is some serious talent at WAYout. 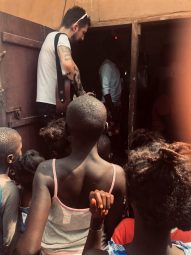 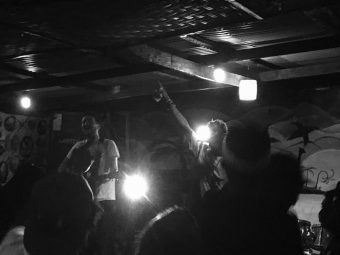 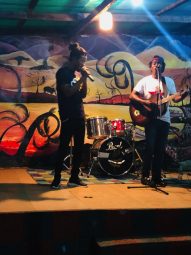 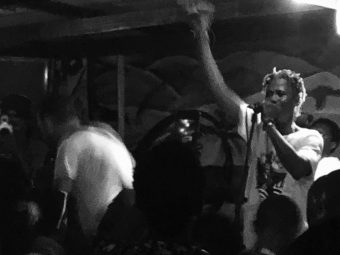 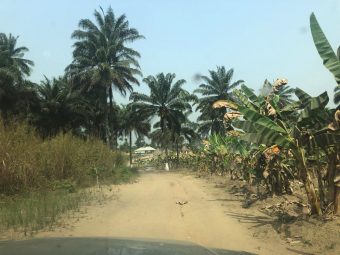 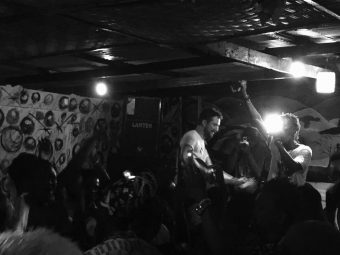 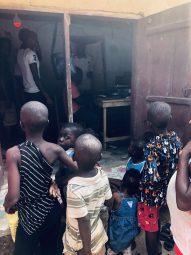 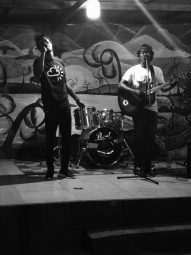 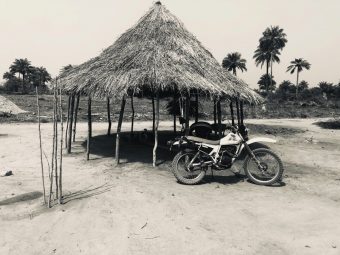 The morning took us to Tacugama Chimpanzee Sanctuary up in the hills. They look after and rescue these great apes who are being kept as pets which is illegal, they also get killed for bushmeat.

Tacugama is a very peaceful place which provided some respite from the hustle and bustle of the city.

We drove out to see how the satellite studio in Kissi Town was doing (this was set up after our first visit to Sierra Leone) there are now some 300 people using the space and as ever we were greeted with smiley happy faces keen to show us what they had been working on.

After some power issues (they only have power Mon-Thurs and 1 generator ) we were entertained by a mind-boggling dance group who were using members as musical instruments.

The evening was something very special. Frank and I went along to Fal G ( once feared gangster and now street ambassador who keeps the peace in the various ghettos ) ‘Best of the Best’ Street carnival which was essentially a gangster block party featuring the top talent was held in Five School.

The fact it was a free entry made it super busy and there was a fantastic energy and when we were there at least, no trouble.

Fal has been working in the different areas for a while now and using music and a show to bring the rivals together really is something special. 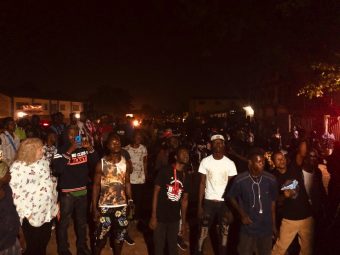 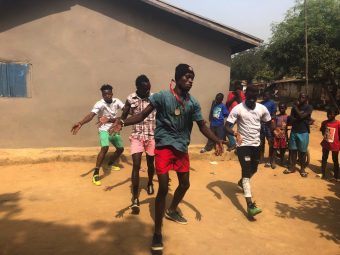 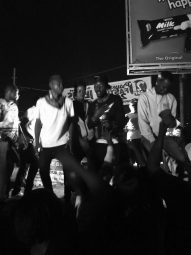 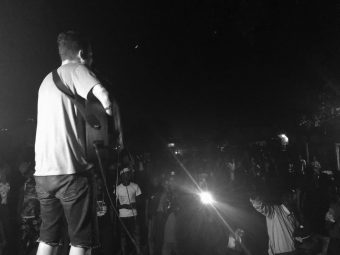 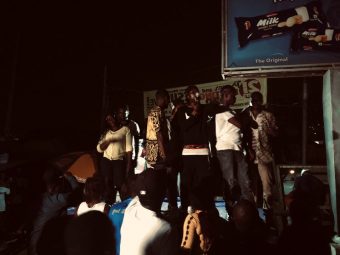 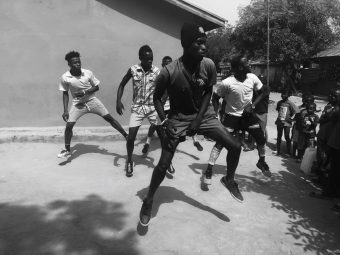 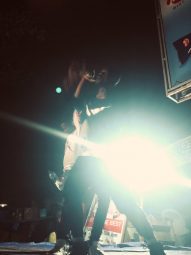 Our final day In Freetown with WAYout Arts. Today was the day we went to the male prison to look at the new JSF/WAYout space where the permanent recording studio will be set up.

The purpose of the studio is to provide the 500+ inmates to channel their energy into music and visual expression – through installing and teaching how to record music and use photoshop.

The fundraising efforts over the past few weeks has enabled us to achieve this goal. And as luck would have it the shipment actually arrived today.

The rest of the day was spent at WAYout, which has become a tradition for all of us on the final day – where Frank can tirelessly record tracks with the endless list of young musicians who patiently wait their turn to create and show us what they can do.

It’s such a pleasure to see Frank work like this, an absolute hero.

Jess ran 2 acting workshops which were very well received. For the first time, we hung about for ‘basic chilling’ where those would have been around all day take a seat together in the yard to drink tea and eat omelette sandwiches which are efficiently churned out by Amara (aptly formerly known as Yum Yum).

After a frantic non-stop tour we all see this time as the perfect moment to reflect on everything we have experienced and it’s an amazing testing ground for new material – expression without fear, without judgement.

How it should always be.

This evening we took in around 10 poems, mainly the subject was the streets and Ebola. There were unsurprisingly some powerful pieces and a couple from King Blaster really stood out.

To cap off yet another remarkable visit to this wonderful city and life-changing organisation there was an afrobeat version of Franks song ‘Little Changes’ which goes down very well here.

All of the WAYout members present were playing percussion, singing, clapping, dancing and most importantly – smiling. A perfect end to another life-affirming trip to Salone. 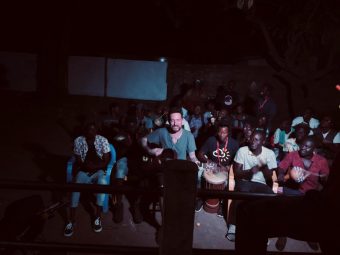 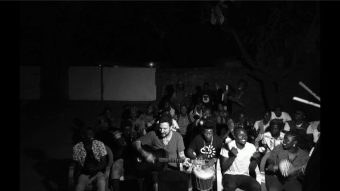 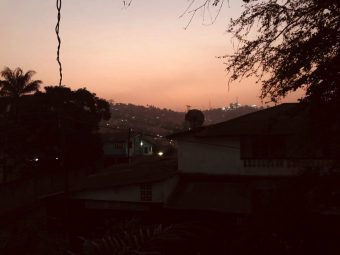