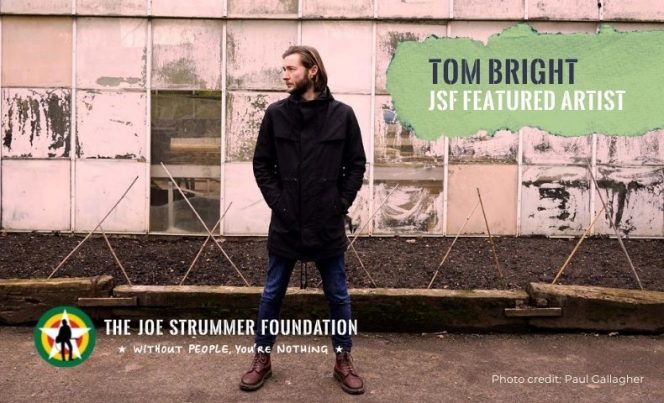 We first came across Tom performing at a benefit show put on by another close friend, Earl Broad in Whitstable, 4 or 5 years ago. I guess we’ve been in touch ever since…..He’s just dropped a new single, wonderfully titled ‘The Man Who Knows That What He Knows Is Nowt’.

Tom me old mucker, how’s it going? Loving the new single, tell us about it?

Alright Jamie! Ahh, thank you mate. Bit of a philosophical one if I dare say. THE MAN WHO KNOWS THAT WHAT HE KNOWS IS NOWT – a real tongue twister, and the third single to come from my upcoming second album (produced once again by Ed Harcourt).

It was during the spring of last year. I’d not long put my first record out and had escaped London for the start of what would become the long, weird time we’ve all endured. I don’t think any of us really knew what was occurring. I’d got hold of a load of books I wanted to plough through – one of which was Socrates’ Defence by Plato. There’s a theme that pops up and really resonated with me, which simply suggests ‘he who knows he doesn’t know all is the one who knows all. I loved it, and as I do, I put my Derbyshire spin on it.

I know that you’re generally a very busy guy, a spinner of plates, a conglomerate of sorts… what has this past year been like for you? In terms of writing, recording, and keeping the wolf from the door?

I must say, I’ve managed to keep very busy. In fact, probably busier than ever (albeit not busy making money, just busy using my time as effectively as possible). I managed to release an album, write/record another + start releasing, wrote a book, set up a radio station (Islington Radio), launched a beer… all sorts. Not been easy in terms of making money (due to my bread & butter of live shows being mostly swept away), but I’d like to say I’ve gunned my focus and energy into creating things that could have a positive impact, and create great things going forward.

You’ve just been out on the road with Juanita Stein, I bet it was a good feeling to be up and at it again. How is playing to a socially distant audience, is there still a vibe?

It was really awesome to be back at it at long last, and actually, the first thing to be hooked up by my new agents ITB. Juanita’s a class act herself, and it was an honour to be a part of one of the first reignited tours.

In terms of vibe and audience, it goes without saying that it was different from what we’re used to – and we really do need to see the return of full cap shows for the sake of all involved. There are certainly some mental scars lingering with some of the crowd. Lots of social awkwardness/anxiety. It’s as if people are re-learning how to socialise. We will get there though. And obviously, I massively appreciated being able to get back to it!

What’s next for your release & touring-wise? I know that you’ve got the Islington Radio Festival coming up in September, what’s that all about?

Lots coming up mate – singles in July, August, Sept, Oct then album 2 drops in November along with album tour across the UK. Also, Islington Radio Festival (which will run at The Archway Tavern in North London between 10-12 September in partnership with JSF). We’ll have some great acts performing and it’ll be so good to get the JSF word back out there in a live event capacity. Looking forward to seeing you there at the stall!

Lovely stuff Tom, thanks for taking the time to catch up.

Go give Tom Bright a listen: