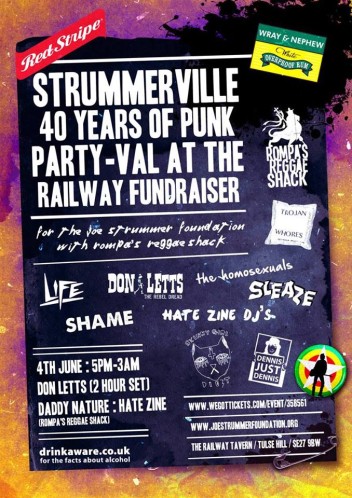 We are super excited to announce “40 Years Of Punk” anniversary celebrations – we the Joe Strummer Foundation, are joining forces with Red Stripe, Wray & Nephew, Concrete PR and South East London’s finest boozer, The Railway Tavern, to put on a fundraiser with a stunning line up that blends 1976 and 2016, then and […]

Strummerville Sessions is a 3 part TV series directed by Don Letts and presented by Jaime Winstone on Channel 4.

Filmed over the past few months the series focuses on six Strummerville bands captured at our festival campfire tour, our Westway Round The UK tour and at our Notting Hill Carnival Party.

Strummerville Campfire at Glastonbury, Lounge on the Farm, Secret Garden and Endorse it in Dorset

Strummerville will be kicking off this year’s festival tour at their natural home, Glastonbury festival. They will be lighting the campfire (the biggest campfire at Glastonbury) Thursday night and keep it burning till Monday morning.

We wanted to share this video with you, made by el Parlante Amrillo. It features Don Letts talking about his new film ‘Strummerville’. Here’s what el Parlante Amarillo had to say:

“The leader of the legendary band The Clash, Joe Strummer, not only made history as a musician and visionary, but that still leaves a mark on new generations of artists through Strummerville. Don Letts made a documentary about the Foundation, and with it brings us closer to punk Strummer’s legacy.”

We are excited to be off to Sheffield next week to open the Sensoria Festival with the European premier of Strummerville – a Don Letts film. Sensoria is the UK’s festival of music, film and digital – the 7-day hive of activity takes place 23 – 29 April. Following the screening there will be a […]

Strummerville are fresh off our amazing trip to SXSW where we presented our take-over on the opening night of The British Music Embassy and our official showcase at Prague on 17 March.