Stay Free: The Story Of The Clash 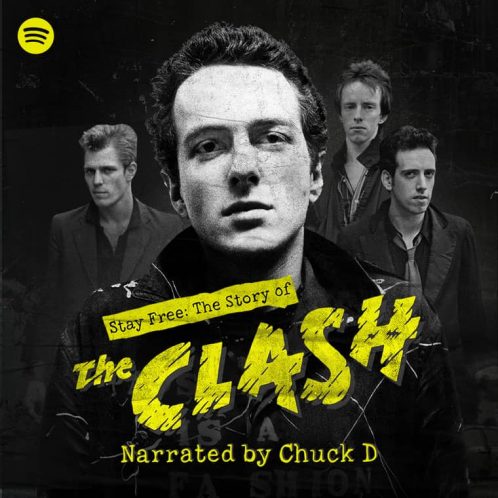 The Clash and Joe Strummer’s legacy still matter, with inspiring & timeless tracks moving from the beginnings of punk through to dub and more.

Stay Free: The Story of The Clash is a podcast series, tracing the origins, rise, and fall of The Clash, excellently narrated by Chuck D (Public Enemy), tracing their journey from London squats to Shea Stadium glory.

“It’s an honour heading up this new podcast Stay Free: The Story of The Clash. I was and am a big fan of their music. We were always tackling very similar social and political issues.” – Chuck D

Stay Free: The Story of The Clash

Episode 1: Lost Boys
It’s high summer 1976, and while a riot envelopes their corner of West London, four hungry musicians find an outlet for their anger in the burgeoning punk scene

Episode 2: A Very Creative Situation
The Clash go from the white heat of “Rehearsals Rehearsals” to their first ever gig, but they’re quickly frustrated by the endless cancelling of shows caused by the media hysteria around punk.

Episode 3: The Barricades
It’s 1977: The Clash sign punk’s biggest ever record deal, release an explosive debut album, and tear across the UK with The Slits on the White Riot Tour. Then a pivotal show takes their anti-fascist message to a new and hungry audience.

Episode 4: Complete Control
A night at a West London reggae show gets the band thinking about new directions and those artists concerned only with “turning rebellion into money.” The Clash’s insistence on doing exactly what they want, how they want starts to create problems.

Episode 5: Do It Yourself
The Clash abandon Rehearsal Rehearsals and move to Vanilla Studios. Drummer Topper Headon reveals himself as the band’s secret weapon, and they record one of rock’s all-time great albums, London Calling.

Episode 6: The News Behind The News
The Clash head out into the heartland of America and, for the first time, experience the emotional isolation of a long tour. Their lives change forever when they reach the place that’s to become their second home, New York City.

Episode 7: Pressure
The Clash’s highly experimental Sandanista! has turned fans and critics against them. However, back in NYC, they record the hugely successful follow-up, Combat Rock. Legends The Who invite them to open at Shea Stadium – is this the life they wanted?

Episode 8: Straight To Hell West Ten
The Clash, now one of the world’s biggest rock bands, are playing huge festivals and making serious money, but Mick and Joe’s relationship crumbles. Will they live to see their legacy and impact on generations of creators?

JSF are now on Spotify: Tune in to Joe Strummer Foundation on Spotify – follow our playlists and enjoy/share the music with your friends.