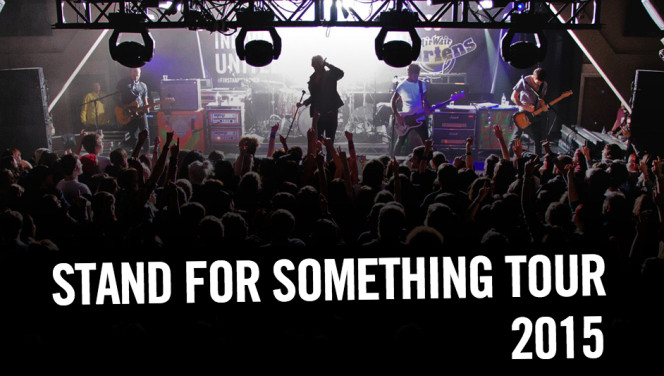 [vc_row full_width=””][vc_column width=”2/3″][vc_single_image image=”11734″ border_color=”grey” img_link_large=”” img_link_target=”_self” img_size=”full”][vc_column_text]It’s that time of year again when we join Dr. Martens on the road for their ever growing Stand For Something Tour.

This year we have nominated Schnarff Schnarff, The New Thieves, Life, R-51, Bear Chest to represent The Joe Strummer Foundation on each of the UK dates. All brilliant bands.

A ‘staccato grunge pop’ rock quintet from the Highlands who base themselves in the Southside of Glasgow. They consist of brothers Jamie & Richard Douglas, Myles Bonnar, Paul Tracey (aka Thunder) and Andrew MacLean (aka Turtle). After the band’s formation in late-2012, Schnarff Schnarff wrote for a year before playing their debut gig at King Tuts in August 2013. Since the release of their debut record in April 2014 (via Electric Honey Records), they have accumulated a hoast of radio plays and gigs including T-In the Park.

“Turning up in Dalmarnock 5 nights a week so we can shut ourselves in our own wee lock-up, forget the jobs, ignore the pish and write music that makes us happy!! We stand for change and a bid of bringing rough, genuine, grungey music back to the masses….some day….some day!!!”

Formed in early 2014, The New Thieves are an unsigned guitar band from the New Forest and Brighton. Honing their sound under a former moniker, before adopting the existing name. The New Thieves comprises Robin Clark (vocals, Bass), Matt Alvis (Guitar) and James Gordelier (drums).

With an unintentionally Brit pop meets Garage rock sound, comparisons being made to Joy Division, The Strokes and We are Scientists, The New Thieves are beginning to make a name for themselves amongst the taste makers of the underground scene. One of their tracks was also used as the soundtrack for the Dr. Martens campaign. Due to release their third track ‘The Beach’ in October this year.

WHAT DO YOU STAND FOR THE NEW THIEVES?

“We stand for the moment.”

Dressed in black, with a rattling set of hook-heavy energetic songs LIFE are not to be ignored. Four workers from Hull who flirt with pop culture, twisted word plays, wasted youth and the horrors of 21st century consumerism.

In a London-centric industry dominated by co-writes and privilege, LIFE bring authenticity to the table; irresistible dark pop that holds a dirty mirror up to modern life.

With Go Go Go, the lead single from LIFE’s debut EP, the band have stuck their flag firmly in the ground, produced and mixed by Ian Dowling (Bombay Bicycle Club, Catfish and the Bottlemen, The Orwells), it’s a frenzied slice of angry, glorious anti-pop that screeches to a halt a mere 1.50 after it begins.

WHAT DO YOU STAND FOR LIFE?

R51 are an alternative rock band from Belfast, NI. Formed in 2013 with their debut single “Boxkite”, R51 released critically acclaimed single “Slowhound” and their self-produced debut EP “Pillow Talk” in 2015.

They built local hero status by playing every dive bar, house party and rave that they could, and were chosen to perform at Reading and Leeds festival 2015 through BBC Introducing. With home-made videos for every track on the debut EP, they also gained an online following through live-streaming gigs from secret locations. R51 will be releasing their second EP in Winter 2015 after their host of autumn/winter shows.

“Freedom of expression, speech, and equal rights for all.”

Creating man rock from a small room in Sheffield, this 3 piece will disintegrate your socks, not just blow them off. Taking influences from the golden nectar and the burning feeling of whiskey in your throat, Bear Chest will make you want to get on your Harley, put your leather on and ride fast and hard!

WHAT DO YOU STAND FOR BEAR CHEST?

“As a brand intrinsically linked to music, Dr. Martens remains one of the most culturally relevant and iconic British brands of all time. All across the world gig goers continue to adopt DM’s as their uniform of choice and the Stand For Something Tour 2015 salutes these music lovers by bringing some of the most exciting bands in the UK to intimate venues across the country for up close and personal live experiences.

With headliners including Palma Violets, The Wytches, Dutch Uncles and Twin Atlantic set to sell out this years tour, Dr. Martens wanted to invite fresh new talent from The Joe Strummer Foundation and provide them a platform for their evolving live sounds.

This year were are excited to welcome 5 of these bands to stages across the country. Life will be supporting Twin Atlantic and Creeper in Leeds, The New Theves will be supporting Palma Violets and Best Friends in Norwich, Bear Chest join The Wytches and Demob Happy in Sheffield, R51 play at home in Belfast ahead of Lonely the Brave and Only Rivals and Shnarff Shnarff share a stage with Dutch Uncles and United Fruit.” – Dr. Martens