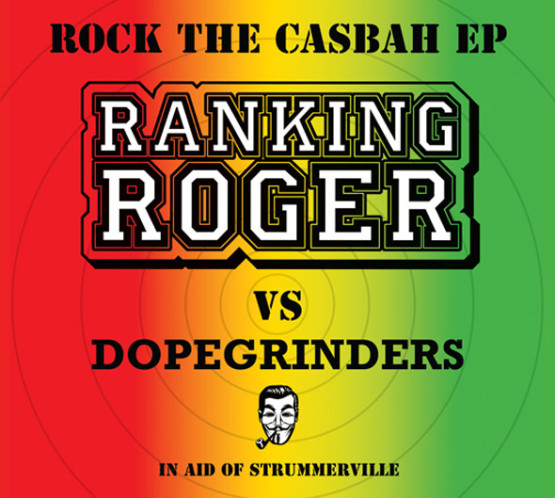 Today we are immensely proud to announce a brand new E.P mixed and produced by RANKING ROGER & DOPEGRINDERS.

All profits from this rare collaborative 5 track EP will raise funds for ‘Strummerville’. The EP and a selection of associated merchandise are available exclusively at from the Pledge Music campaign page http://www.pledgemusic.com/projects/rockthecasbah

ROCK THE CASBAH E.P. IN AID OF STRUMMERVILLE

In 1981, coming off the back of The Beat’s top ten hit “Too Nice To Talk To”, Roger was asked by Joe Strummer and Mick Jones to sing on a version of Rock The Casbah that the Clash were recording. This lead to further collaborations between Roger and the Clash on the road, and then to Mick Jones playing guitar (and nearly joining the group) for General Public, the band that Roger and Dave Wakeling formed after the break up of The Beat in 1983, which enjoyed considerable success on the USA (their biggest hit, Tenderness, still being used in movies today).

While Roger and The Clash’s version of Rock The Casbah was never released, Roger has continued to play the song live (it was included on his recent Live In London CD), so when he met the producing duo Dopegrinders at Across The Tracks festival in 2012, and they decided to record together, it was an obvious track to start with. To make it even better, Mick Jones, as a favor to Roger, very kindly made the original stems available for the Dopegrinder’s use. By way of thanks, Dopegrinders, Roger & The Beat agreed to contribute all their collaborations to the charitable foundation ‘Strummerville’, to be released in December 2014, the 12th anniversary of Joe’s death (22 December 2002).

All profits from this rare collaborative 5 track EP will raise funds for ‘Strummerville’. The EP and a selection of associated merchandise are available exclusively at http://www.pledgemusic.com/projects/rockthecasbah now.

As well as 2 different mixes of ‘Rock The Casbah’, the EP also contains ‘Return of The Dread-I’, a song written by Roger, his son Murphy & Hugh Harris, ‘On The Road’ – a Roger & Murphy composition, and a re-working of Muscle Ska, co-composed by Roger & Neville Staple from The Specials.

Strummerville is a registered charity that was set up by the friends and family of Joe Strummer in the year after his death. Strummerville gives opportunities to aspiring musicians and support to projects that create social mobility through music (www.strummerville.com).

Roger will be playing all the above new material on his 2014 autumn dates (please go to www.thebeatofficial.com for more details).