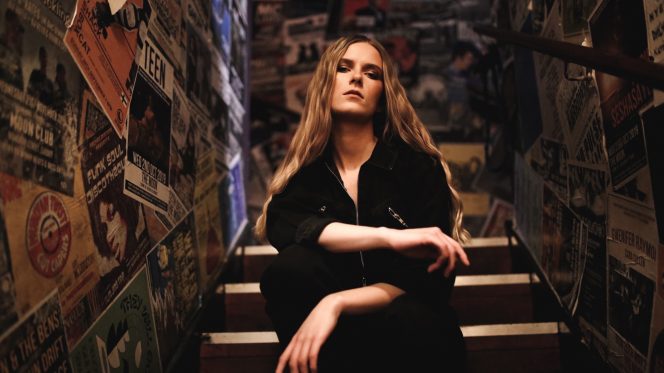 This month, JSF caught up with rising talent Lissy Taylor. Have a read!

1) Hey Lissy! Great to meet you. You’ve been sticking some great sounds out there these past couple of years. Tell us a little about your journey so far? Where did it all start?

I did my first open mic when I was 13 The Star in Stone (Staffordshire), so when I moved to the USA at nearly 15 it felt natural to join in with the open mike nights over there.  I started writing as a way to deal the the move to the USA as I really didn’t want to go at the time and this developed into songwriting. I then after playing the open mics for a while I got asked to start performing professionally so I’d play at bars and venues. I came back to Manchester in 2017 where I started uni (BIMM) studying songwriting where I also got my band together and started doing gigs in Manchester. Since then with releases I’ve picked up national radio on BBC 2, Radio X and a lot of support from BBC Introducing. Last year (2021) had my first TV debut on Sky showcase with Mark Radcliffe and completed my first headline UK tour with the band. On the last date of the tour I met Paul at The Water Rats in London, which was brilliant. Then this year I’ve recorded with Gareth Nuttall and released singles throughout the year, most recently ‘Fierce’ 14/10/22. This summer I played a few festivals, YNot, Into The Wild and supported Stanleys at O2 Manchester.

2) Love it! So, now you’re at this point, what’s next on the horizon? New single? Working towards an album?

Ive put out 5 singles this year, Young, She’s A Stunner, Healer and Fierce the there was also one a house remix done with Gab Hydes for Young I.’ve got a load of new material to work through and the record ready for next year.   It would be really great to put out an album, guess we’ll have to see…

3) What’s been your own personal highlights in your career-to-date?

My debut UK Tour was pretty special, (especially as Mr Paul Gallagher came to watch, I was made up). Getting the national radio on BBC Radio 2 through BBC Introducing and being added to the X-posure playlist for Radio X really was a massive moment for me too.

4) And gig-wise, where can we see Lissy Taylor in action?