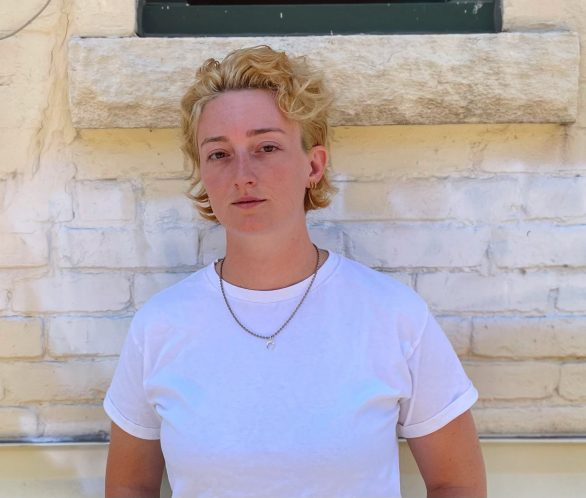 This month, JSF caught up with talented Canadian artist Jacqueline Tucci on all things happening over there…

1) Hi Jacqueline, thanks for taking the time today to chat with us. For those who are currently unaware of yourself, tell us a little about your journey so far: where you’re based, how it all started, what’s been cooking these past couple of years musically/release-wise, etc?

Hi! Thanks for wanting to do this. For those who don’t know, my name is Jacqueline Tucci and I’m a musician from Toronto, Canada.

This whole thing started when I was a really young kid. Music was always a big part of my life as a fan and I was always interested in the idea of songwriting and playing music, but I was inspired to actually start playing guitar and to start a band after seeing Green Day and Anti-Flag on the American Idiot tour. After playing in different bands for a few years I started writing solo and did the acoustic thing for a while. Now, I still mostly write solo but the songs are full band-arrangements and I have a live band. I definitely prefer louder, full-band music, so for me it was just a natural return to making the type of music that I like the most.

I released three singles in 2020, and since then I’ve been working on refining my sound and writing more songs. I like to take my time with things. I sometimes feel a pressure to release music more frequently but I want to release things that I feel connected to and proud of, whatever that means and however long it takes.

2) We’re really digging your last release, ‘Sweeter Things’. Grungy vibes. In fact, it’s left us wanting to hear more – so what’s next? Any new releases in the works?

Thank you! I appreciate that. Like I said I’ve definitely been taking my time between releases, but I have at least two new singles that are ready to go and I plan to record them this summer and fall.

3) You mentioned to us that you play bass in a band also? How did that all start, and what’s been happening there?

I do! The band is called Grizzly Coast. A few years ago I had a radio show on my school’s campus radio station and I would interview bands and record live sessions. I had Alannah (the songwriter and artist behind the Grizzly Coast project) on the show, and we hit it off. We became good friends and when she was looking to expand from acoustic songs to full-band, I joined. I really love playing bass so it’s been great. I enjoy just focusing on the playing too, it’s a nice change from my band where I play guitar and sing.

We also have some new music in the pipeline with plans to head into the studio soon which is exciting, and we’ve been playing shows around Toronto.

4) How’s the music scene in Toronto? Have you managed to do some touring around Canada yet? And have you made it elsewhere/do you have plans to?

I have always thought the music scene in Toronto is great in terms of the bands and artists we have here. Like I mentioned before, I used to do a community music radio show and that really opened my eyes to the huge number of amazing musicians in the city.

I haven’t had a chance to tour Canada or elsewhere yet but I think that would be absolutely amazing. Recently I’ve been reading about the history of the Vancouver punk scene and listening to some of those bands so I think it would be cool to go out there.

5) Lastly, how do we keep up to date with yourself/the band, and what can we expect next?

Instagram is a good place to keep up with me and any music news. You can find me @jacquelinetucci. That’s probably true for Grizzly Coast as well, @grizzlycoast, or just through my page.