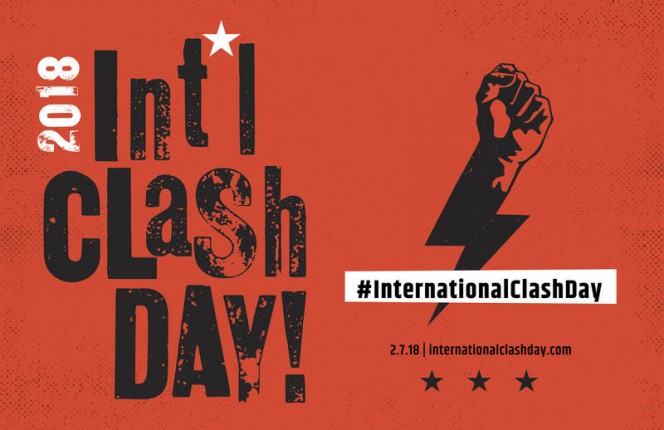 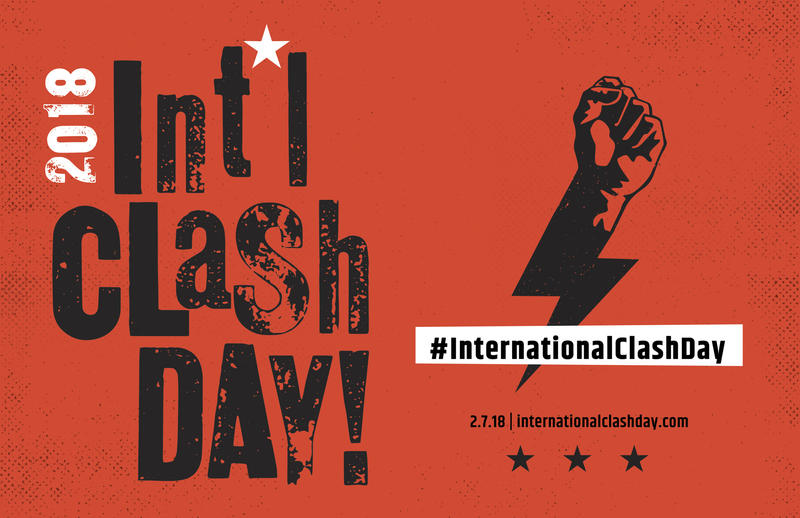 On February 7th, 2018, music lovers all over the world will observe International Clash Day, an annual celebration of seminal UK punk band the Clash, and a recognition of the enduring influence of their music and human rights message.

This year, city governments, radio stations, record stores and music venues on all seven continents will mark the occasion with special programming, spotlights, official city proclamations and more. A constantly updated listing of all of the participating organizations and communities, along with downloadable International Clash Day posters, shareable graphics and more are available at www.internationalclashday.com.

“Know Your Rights,” the first single from The Clash album Combat Rock, is a biting take on the civil rights of the poor and disenfranchised and serves as a prime example of the Clash’s unique ability to blend social commentary, activism, and incredible music. On February 7th, the music of the Clash will serve as the soundtrack to the hard work, resolve, and commitment to upholding and advancing the values of a free society and an inclusive world.

Radios in 16+ countries will be tuned into Clash programming on February 7th, as 65 radio stations (and counting!) around the world will celebrate International Clash Day with special programming, with Ice Radio 104.5 FM at McMurdo Station, Antarctica kicking off the festivities, followed by RDU98.5FM Christchurch, Canterbury New Zealand and OCR FM in Colac, Australia.

International Clash Day began in Seattle in 2013 when KEXP Morning Show host John Richards decided that one Clash song wasn’t enough, and dedicated the rest of his show to the Clash. Over the next few years, the programming grew and expanded, other radio stations started following suit. Ultimately, cities around the world began to officially declare February 7th to be International Clash Day.

This year is no different, with official proclamations issued by cities and municipalities far and wide, including Washington DC, Tucson AZ, San Francisco CA, Austin TX, Vancouver BC, Kent OH, Burlington VT, and the State of Washington, including King County and the cities of Seattle, Spokane and Olympia. More cities issuing proclamations will be announced in the days to come at http://www.internationalclashday.com and KEXP.ORG.

As the originator of the holiday, KEXP will be going all-out to celebrate. From 6AM to 6PM Pacific, KEXP will play Clash originals, covers and side projects, along with the music that inspired the Clash and music inspired by the Clash. KEXP will also feature exclusive interviews with Mike Scott of the Waterboys, Moby, Alex Kapranos of Franz Ferdinand, and Steve Jones of the Sex Pistols, plus many more. Leading up to the 7th, KEXP will follow the example of The Clash by using the airwaves and music as a vehicle to spotlight local organizations that focus on human rights.

To cap off the day of on-air programming for International Clash Day, KEXP is hosting a Clash Cover Night on Wednesday, February 7th at 7:00 PM in the KEXP Gathering Space. The evening will feature music from Ayron Jones, Spirit Award, Emma Lee Toyoda, Low Hums, Black Nite Crash, and OCEANWIRES, a Clash photo booth and more to be announced. More information and tickets at KEXP.ORG.

John Richards, KEXP: “We couldn’t be more inspired and blown away by the response of other stations around the world. KEXP is always trying to bring music lovers together around the world and to see the global message of The Clash providing that connection is exactly the reason why we HAVE an International Clash Day. People are looking to rally around something meaningful, something that allows us to be excited about the international movement for justice, equity, inclusion and freedom of expression. The Clash made music to rally around.”

Steve Mullen, the Joe Strummer Foundation: “The Joe Strummer Foundation are proud supporters of International Clash Day. We know that Joe was more than a musician, that he had a way about him, a special thing that brought people together. The work we do is to try and carry this forward, to connect people, to give support wherever possible and to create empowerment through music – it is our core belief, and the very reason that our organization exists today. So let’s dedicate International Clash Day to everyone influenced by Joe, The Clash and punk rock – past, present and future!”

Alex Kapranos (Franz Ferdinand): “What I admired about The Clash was from the generation that they came from. They didn’t feel as restricted within their genre as maybe some of their contemporaries did. I love the way that they drew initially from reggae. And now in the age of streaming music where you can access songs instantly and people have less of a reverence for the constraints of genres. It doesn’t seem particularly shocking to us, but back then the idea of a punk rock band mixing a bit of disco in there, I don’t know, that upset quite a few people and I love them for doing that. I totally respect them and you know a true artist sees the good in every genre.”

Mike Scott (The Waterboys): “I listened to the first Clash album, and slowly it had an electrifying effect on me… to me that first Clash album is like a bolt from the blue. All those fantastic short, super-fast songs. And then I went to see them live at Clouds in Edinburgh, which is a big disco, and they were the most incredible band I’d ever seen. Now, I’d seen The Rolling Stones, The Who. Lots of the great bands of rock as a teenager, but The Clash blew them all away. The energy of The Clash was so exciting and so dangerous and so unrestrained. And they were like an army on stage. Beautiful in their power.”

KEXP is a music-focused nonprofit arts organization serving music lovers and artists through in-person, broadcast, and online music programming. KEXP operates one of the most influential listener-supported music radio stations in the country, KEXP-FM, Seattle. More than 200,000 listeners from around the world tune into the station each week over the air and online. On KEXP’s YouTube channel, videos of exclusive in-studio performances garner more than 2.4 million views per week. KEXP produces hundreds of live performances and music events each year, many of which are open to public audiences at no charge. More information at kexp.org.